I know I shared some of the crafty gifts I was giving for Christmas this past year, but I couldn’t share them all because some of my loved ones actually read my blog!  And I realized today that I can share them now (now, that it’s February…)

This is a tote bag I picked up from Hobby Lobby for $3.  I also used sprayable fabric paint, and contact paper for the stencil (which I downloaded from Martha Stewart).  I traced the stencil onto clear contact paper with a sharpie, and then cut it out, and applied it to the front of the bag. I was able to use the stencil twice (I made two bags), although I did have a few small tears that I had to pay special attention to with the second bag.  Once the stencil was applied, I used the spray-paint, also found at Hobby Lobby, and let it sit.  When dry, I peeled back the stencil, leaving this: 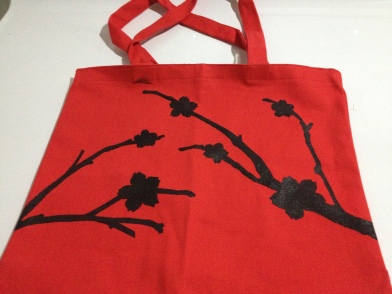 I also made some large prints like these, but made it much easier on myself by using large poster frames (which were 70% off at Michael’s) rather than trying to use spray adhesive or mod podge to attach them to MDF or foam core board.  Then when they inevitably fade, I can replace them with new ones.  The three prints altogether cost me about $3 at Staples.  I think the three frames together came to about $20 at Michael’s: 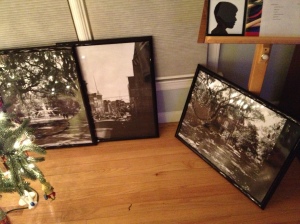 Finally, in the picture above, you can also see my little silhouette project, which was way easier than it looked and brought tears to my mom’s eyes.  I used this tutorial (although getting The Boy to be still enough to get a sideways shot of his head was easier said than done – I managed to get one while he was asleep), and here is a larger shot of the outcome: 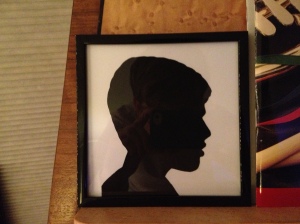 We had a fine, crafty Christmas, and my pocketbook is thanking me for it!