The Boy has been anxiously awaiting the opening of the pool at the big park near us, and it finally opened Memorial Day weekend.  Except it was cold that weekend.  And then we’ve had lots and lots of rain.  So he’s been a bit focused about being able to go to the pool.  I suggested we do it last week for Fun Friday, and he was all for it.  And then it rained, again.

I told him we could go the next morning, so we did.  We stepped outside and realized it was not altogether warm, mainly due to the wind, and there were some gray clouds looming, but I couldn’t put him off any longer.

We arrived, paid our admission, and went to get a locker and put on sunscreen.  We emerged to the pool area to realize that we were the only ones there, and were rousting the teenage lifeguards from huddling in their sweats in the “office”…

I set the timer, and he gadded about, going down the slide, jumping off the diving board, all while five lifeguards looked on.  And I felt kind of bad for them, and then I stopped – they were getting paid, so they could sit and watch my kid for awhile!

After a good half hour, a few more people straggled in, and then a few more.  By the time we left there were maybe 11 people in the pool, but it was all good.  It was warm when the sun came out from behind the clouds, The Boy had a great time, and had no problem leaving when it was time to go, except to say, “Maybe we can come when it’s warmer next time…” 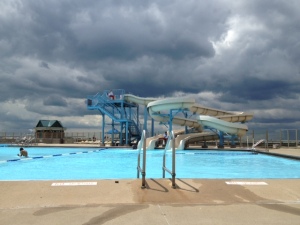 Vacation is sometimes a double-edged sword for those of use with special needs kids.  It’s rarely a vacation for us adults, although a fun change of pace.  And the kids, well, the lack of structure and normalcy can tend to … END_OF_DOCUMENT_TOKEN_TO_BE_REPLACED