This morning, The Boy’s transport van was ten minutes early.  If you know nothing about autism, you probably still know that routines are king, and if you mess with a routine… Well, watch out.

I heard the first honk at 6:38am.  The Boy had just decided he didn’t want to wear the pants we had chosen, but wanted to wear the blue ones.  I frantically searched for the blue ones, found them, gave them to him and he said, “Their inside out!”  I quickly turned them right side out, handed them to him and asked him to put them on, while I found a pair of socks to put on his feet myself.  That done, I headed to the front door, opened it, and stuck out a finger (no, not that one, although I was tempted), to let her know we had heard her and were coming as quick as we could.

I returned to The Boy’s room, and told him to go put his shoes on.  I grabbed his poptarts in a baggie, and his bookbag, and tried to hurry him out the door.  “Where are my glasses?” he wailed.  I set everything down, and went into his room to get his glasses.

Really?  Did you think I didn’t know you were there?  I already came outside in my robe to let you know we were coming, but you needed to honk again?

When I came in, The Man said, “Really?  Why was she so early, and why did she have to honk twice?”  Exactly.  “You need to call them and tell them they can’t do that to him.  He needs his routine, and they definitely don’t need to be honking like that.”

The Man advocating for The Boy.

Not just supporting me, because he knew I was a bit frantic and anxious from the situation the driver created (which he did, as well, asking more than once if I was OK), but actually defending and advocating for The Boy. 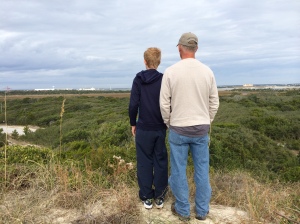 A friend posted a link to this opinion piece, “The ‘Busy Trap'” by Tim Krieder of the New York Times.  Go ahead and click it.   Read it and then come back.  I’ll wait…

Did you really read it or are you cheating?  No, it’s a thought-provoking read, and will give you some context for what I’m about to write.  Go ahead.  Just be sure to come back.

I have to say that as I read it, I recognized my old life, to some extent.  When I was a teacher, there were always committees and leadership opportunities, and I rarely said no.  This resulted in sometimes three meetings after an already long workday, and barely any time or energy left for my son.  From the time I was in college, I was a do-er and you would often find me on the board of some group, or chairing some committee, and my planner was my lifeline.  I always had rehearsals and meetings scheduled, often into the wee hours of the morning.

And I also recognized my old students.  The kids who were at the dance studio every day after school until well past a normal dinner time, and when they weren’t taking classes, they were teaching them.  The kids whose hockey schedules ruled their lives instead of school and friends.

And the kids of friends.  Those friends who find it hard to say no.  The friends who made a conscious decision to sign their kids up for competitive activities (big parenting hint: “Competitive” anything will rule your life, and leave no bones).  And who say this “saying no stuff” is easier said than done.

My kid isn’t involved in much of anything, which is actually a blessing of his disorder.  Team sports are not and will never be our thing, thank goodness (I know his dad has always felt otherwise, but not me).  He loves to just ride his bike around the small neighborhood we live in.  Or mess around on his computers.  If I had the money, he might take swimming or Tae Kwon Do, but only if he wanted to.

I wasn’t either.  I was a brownie for awhile until our troop leader quit.  And I was in band, but it wasn’t like competitive marching band of today’s standards, with rehearsals 2-3 times a week not ending until 9pm.  I was on parks and rec basketball once.  And softball one other time.  And I took flute lessons once a week.

The rest of the week, I was free to play with my friends in the neighborhood.  Sometimes we played school (can you guess who instigated that?), but often it was tag (remember tag?), and around dusk it was Ghost in the Graveyard.  Guess what?  Our kids don’t even know how to play those games anymore.  Because they don’t have the time.  Between piles of homework from schools trying to jam more curriculum into a 9 month school year, and all of these scheduled activities they are in, no wonder there are so many young people growing up depressed.

We need to make ourselves a priority in our own lives.  If you (and/or your kids) are so busy and stressed that you don’t have any time in your week to just sit and think, there is something seriously wrong.

We need to take a page from our parents, and their parents, and all the generations who came before.  When people age they generally downsize to a smaller house or apartment (less maintenance and upkeep = more time with your family), get rid of the belongings (see George Carlin on “stuff”), and spend their time doing what they wish, or even nothing at all.  They may sign up for a low-impact Zumba class, or head over to the senior center for a round of Bocce Ball with the boys.

But it’s not Competitive Bocce Ball.