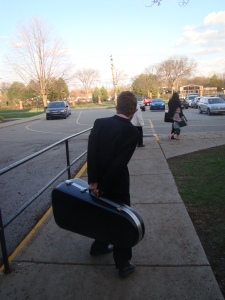 We had another concert tonight, and The Boy performed was excited, performed well, and made us proud.  I didn’t have to ask more than once for him to get dressed when it was time to go, he lugged his baritone out to the car without being asked, and had no problems once he was dropped off with his classmates in the designated room.  When it came time to perform, he went to his spot, and played well, often without having to look at the music (how does he do that??).  He maintained his composure during a piece where some of the other kids in the band had to stomp and scream (although he was struggling not to collapse into a fit of giggles), and was proud to stand for pictures after with his grandparents.  Then we went for dinner at one of our favorite restaurants, and he shared his brownie sundae for dessert.

A non-routine evening is often great fodder for a meltdown, or at the very least, is a source of anxiety, but tonight was pure excitement, joy, pride, and satisfaction.

And since this type of night is my kinda thing, I’m an extra-proud mama tonight.