Water has such a great effect on both of my boys.

The Man is a surfer, and has been since he was 12.  He starts to get a little cranky if he hasn’t gone surfing in awhile, and just being in the water, doing his thing, does amazing things to his outlook.  He needs the water almost as much as he needs air to breathe.  That was part of the reason we decided early on that The Boy and I would move down here rather than have him move up north with us.  He wouldn’t have survived away from the ocean. 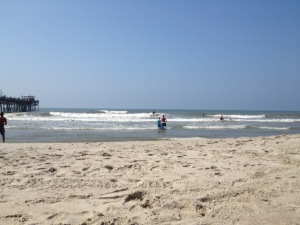 The Boy reacts similarly to the water, like many kids with autism.  He has always been this way, and could very easily spend his entire day in some form of water.  I’ve written before about the amazing power of water over him, and the immediate calming effects.  If he starts heading toward a meltdown, throwing him in the tub for awhile is the easiest way to avert it.

Over the past several years, The Man has been introducing surfing to The Boy, and The Boy loves it.  I also love to see them sharing this.  The Man is amazingly patient teaching him where to position himself on the board, how to stand, and how to keep his balance.

Today, we went to the beach, and today, The Boy went from riding on his tummy, to kneeling, to standing on the board, all in one ride, and I think this was the first time I saw him do all of this in one motion.  And he was so persistent.  “One more time, because I wiped out.”  I could glimpse him doing all of this on his own in a few years, something I was never sure of before.  So often, those of us with kids on the spectrum really can’t see into the future like parents of NT kids can, so when we get a peek like this, it’s pretty exciting.

This makes me a proud and happy mama. 🙂