I was painfully shy as a kid, and pretty much a loner.  I had friends, but I was not the type to have a ton of friends (until I found some like-minded individuals in high school), and I was often nauseated at the idea of initiating conversation.  As an adult, I have become more able to engage with peers, although I still can’t stand talking on the phone, except with my family and closest friends.

And yet, stick me in front of a classroom full of kids, and more recently, a meeting full of teachers, and I don’t really have a problem.  Why?  Because I have confidence that I know what I am talking about, and that if challenged or questioned, I have the wherewithal to respond appropriately, with correct answers.

And so.  I think of the times when I have not stood up for what I knew to be right, because I didn’t yet have the confidence in myself that I knew more than the other side… 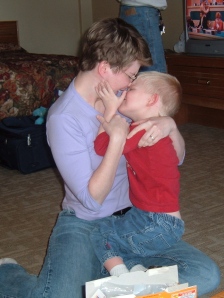 I would have asked what the preschool meeting was about, specifically, and who would be in attendance.  Upon finding out that the entire preschool staff would be in attendance, I would have brought at least one person with me to take notes and glower at them when they intimated that The Boy was not welcome back to preschool due to the difficulties he was having.  I may have even brought some rebuttal material from IDEA, and challenged them instead of sitting there like the deer in headlights I was.

I would have done the same with next preschool teacher.  I would have requested an IEP meeting, and brought an advocate.  I would have asked for copies of the reports and the data upon which she was basing her assessment that The Boy was not ready for kindergarten.  I would have asked why in the world she waited three months to tell us that she didn’t think our son would progress to the next level.

I would have been “that mom”, because I am his mom.  The only one he has, and the only person on the planet who knows him best.

7 thoughts on “Dear Me, Back Then”