The Boy in recent years has looked more forward to it, I’ll admit. But the reality is that the slightest changes in routine throw us all off, and Spring Break is a million tiny changes in our routine and a lot of big ones. Normally, I wake up at 6am to do yoga. Apparently the act of walking down the hall at that time of the morning, gives The Boy some sort of pre-wake up call that I wasn’t aware of. Because apparently, when he is on Spring Break, and does not need to leave the house as early, I am still required to wake up at 6am. Grrr.

And someone (I shall not name names) ate two packages of pop tarts (!), at some point this weekend (we usually get breakfast elsewhere), which leaves one to last us until Wednesday. That same someone complained to Grammy that he had not been given breakfast…

That same someone also required umpteen reminders yesterday to get out of bed and get ready to leave. He waited until the last minute, couldn’t find his headphones, and got upset… sigh… (later found under the bed at Grammy’s, just like everything else that gets lost).

He also thinks he can stay up all hours of the night watching movies in his room.

I’m going to wake him up in 14 minutes. That will be 15 minutes earlier than yesterday. We shall see if allowing him more time to procrastinate helps the situation. But I’m pretty sure the only thing that will help this situation is sending him back to school… 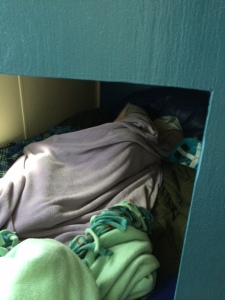 The Boy, still sleeping, catching up from Spring Break at his dad’s

The Boy is back and seemingly had a good time.  And I am glad.  I’m glad there were no emergency phone calls asking me what to do because he is having a meltdown.  I’m glad it sounds like they actually spent time together, which hasn’t been the case in the past.  And it’s early days yet, but I’m glad that The Boy seems to be happy to be home, with no lingering ill-effects like cat scratches covering his hands, or a fear of the bathtub.

I am happy to have him back, and I am happy he had a good time.

That does not mean that I trust things with his dad have changed.  While setting up this trip, his dad talked about taking him to Disney in May, because he knows someone who works at Discovery Cove and could get “us” into all the parks for free – you see, he wanted The Man and I to share in this adventure, most likely because he wanted us to drive The Boy down to Orlando to meet him.  I asked him not to mention this idea to The Boy, and told him May wouldn’t work, as The Boy is still in school at that time.  When we met for drop-off, the ex explained that it would have to be postponed, and that the cost of Discovery Cove would be $150 each for he and The Boy, and if The Man and I wanted to go it would cost us $400 a piece, so maybe we wouldn’t want to do that.

So says the ex, who is almost $800 behind in child support.

So you see, I am happy this trip was able to happen.  I am happy The Boy seemed to have a good time.  But not for one second do I think things have really changed.  Not for one second do I believe the ex is done hurting The Boy, albeit unintentionally.  Plans will continue to be cancelled, phone calls left unmade, etcetera, etcetera, etcetera…  Maybe it’s pessimistic, and distrustful, but it’s also evidence-based, and I am too protective a mom to think otherwise.

Saturday, we hope to take The Boy to meet his dad so that he can spend the week with him.  He hasn’t seen his dad since last March, last spring break.

The Boy is excited, especially knowing that his dad has a new puppy to meet and a new car over which to obsess.  I am happy that he is excited, and happy that his dad seems to be making an effort this time around.  But, as always, it is with guarded optimism.  The Boy has been hurt too many times for me to blindly accept that all is sunshine and lollipops.  I won’t trust that this all will happen as planned until we actually see his dad on Saturday.  And not for one second do I believe that there won’t be an impact after Spring Break.

Even when trips like this have gone well in the past, there has always been an adjustment back tour normal routine, household rules, and expectations.  And I am preparing everyone here that hasn’t experienced this first-hand before.  The Man says he understands and is ready, as do his teachers – I have prepared everyone to the best of my ability for the inevitable transition that will occur when he returns.

And if it doesn’t go well, or doesn’t go at all, it’s a whole ‘nother story, as you can imagine.

But right now, we are cautiously optimistic, glad to see The Boy’s excitement, and holding our breath for now.

We have 10 weeks to go before the big move, and it feels like we’re out of time.  We have prepped The Boy, and he has shown increasing acceptance, although he still talks about cloning himself, so that various copies can attend all the middle schools in our area, and one can even play video games all day and visit his current ASD teacher after school.  I don’t disabuse him of these fanciful notions, choosing instead to concentrate on the realistic, and I am getting a strong urge to kick it up a notch with this approach.  I picked The Boy up from his dad today, and began talking about the changes to come, reminding him of everything we had talked about with the moving process.  At first, all seemed OK, and then he began to fret about last spring break.

Part of his autism includes never forgetting things that have upset him, which are usually times he has missed school for various reasons.  Luckily he does not get ill often, but there have been times over the years when he has either had to stay home from school or be picked up due to illness (I learned early on never to make appointments for the doctor or dentist that interfered with school, because I would never hear the end of it).  Last spring break, I had to make an agonizing decision about pulling The Boy out of school for a week so that I could have a vacation.  Our breaks did not coincide, and not pulling him out meant I would get no break at all.  It may sound selfish, but I am firmly in the camp that believes that if Mama ain’t happy, ain’t nobody happy, and therefore I decided to pull him out.  I also chose not to tell him that he would be missing school.  Honesty is usually the best policy, but if you don’t have to step in manure, than why would you choose to?  Unfortunately, a parapro let it slip a few days before that he would, indeed, be missing school, and that was just about the worst thing that could happen.  It was as close to the end of the world as it could get for The Boy, and on top of it all, I had “lied” to him.

Needless to say, with the memory he has, especially for tragic events, this has come back to haunt us a time or two, as it did today.  The Boy was in tears about something that had happened a year ago, and it is one of those things about autism I have a hard time wrapping my brain around.

We talked about how it was in the past, couldn’t be changed, and how we had to move on from that.  I promised it would never happen again, and he launched into his next set of fears, having to give away all of his toys, because he is “skipping middle and high school, and going to college”, like Andy from Toy Story 3.  We have talked about how we will be purging some toys before the move, and this is how he interprets it.  So we talked about part of growing up is outgrowing things like baby toys and baby clothes, and that once you learn what those toys have to teach you, they are much more suited to younger children.  I reassured him we weren’t throwing toys away (a constant fear, again, thanks to Toy Story 3), but donating them so that 3rd graders could play with his 3rd grade toys, and so on.  This idea of outgrowing clothes and toys seemed to make more sense to him, and he quieted, thinking about everything I had said.  After a while, his tears turned to smiles, and we were back on track.

I have done what I can to prepare for possibilities.

I can’t do any more besides try to let the anxiety go. (As Grandma always said, “Do your best and that’s all you can do.“)

Today, I am back to running errands, planning to do taxes, getting an oil change.  Taking care of things that need to be taken care of before a trip, and in so doing, attempting to let the stress of the last week go, come what may.  I am as prepared as possible.

I just spoke with the ex about spring break plans.  He is supposed to have The Boy for the week, and I just never know what’s up, it seems, until the last minute.  I texted him the other night, asking him if he was planning on having The Boy for the week, and he said he was.  We spoke this evening, and I’ve noticed that recently, he has been trying to do some Jedi mind-meld deal like tonight when he said, “So we’re going to do Saturday to Saturday again?”

We have never, ever done Saturday to Saturday, but I think he thinks that if he says it that way, I will go, “Yeah!  That sounds good!”

Does he not remember that we were married for ten years, and never once was I ditzy enough to fall for that kind of crap, and in the almost five years since the divorce, never once have I been inclined to do anything but tell him how it’s going to be?  Because realistically, and according to our court documents, his visitation starts the evening of the last day of school for The Boy (Thursday) and runs through the day before we return (Sunday).  And I am not inclined to give him an inch, especially when he has the track record he does.

I explained my plans, and since he knows that I am still doing him a huge favor by meeting him (or his parents, whoever comes to pick up The Boy) about three hours from home (saving him 6 hours in one trip), he agreed.  At least for now.  He could always call the night before and cancel the whole thing.  If that happens, no worries.  The Boy and I are used to it by now.