Why haven’t I been posting?

At first it was because I was working hard on my novel, because writing is my thing – the thing you would do if you won the lottery and could do anything you wanted? I know, counterintuitive that I stopped writing to pursue writing, but time, man. There just isn’t any when you work 9 to 5.

Then it was the election. I shook with fear as the results rolled in, and my fears were not unfounded. This country is really going in the wrong direction (to put it much too mildly), and this election will have direct, negative impacts on my family, the most important of which are threats to The Boy’s future, and the safety nets that are supposed to be there for him.

And then the horror that is second semester, freshman year tiptoed up behind us, tapped us on the shoulder, and whispered, “Surprise!”

I’ve said before that we have been quite lucky since The Boy was born. We’ve had many good teachers, and wonderful members of our tribe support him in such a way that even though he has his moments, we have not experienced anything “severe.” Until now. And I’ve hesitated to write about it, not because I want you all to believe we live in some fantasy land of “easy-autism”, but because I didn’t want to invade The Boy’s privacy. I know I wouldn’t like it much if my mom had a blog and told the world about all of my problems.

In honor of this month of Autism Focus, I’m coming back. And I’m going to share with you what we’re going through as best I can without oversharing.

We still have beautiful moments. Yesterday, The Man was putting some pavers down in our yard between our new porch and the driveway, and I watched The Boy fill a wheelbarrow with sand, push it across the lawn and dump it like he’d been doing it for years.

And then this morning, he rampaged through the school office, tearing two plants to pieces, pushing books off a table, and overturning a chair.

This is autism. How do I deal with it?
Simple. I Just Do.

The Boy is what I call not-quite-verbal. He can speak, had years of speech therapy which started with teaching him basic words like “running” and “ball” with flash cards. He enjoys words a great deal, and finds puns and double entendres highly entertaining. One of his obsessions is “ugly sounds” in the band class, and when I remind him that reading The Hunger Games is on our schedule for the evening, he says, “Reed!” back to me, with a perfect imitation of the sound of a reed instrument squeaking. He then explains the joke, that “reed” r-e-e-d is not the same as “read” r-e-a-d, and which one did I mean? Haha.

But ask him what he did in school today? Crickets. Not a peep. Ask him where his field trip is on Friday? Not a word. It’s not as if he doesn’t know. He just cannot form the words. And due to his verbosity at school about his favorite topics, those who know little about him or about autism assume a lot. 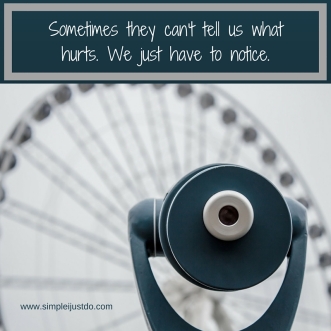 He also will never tell me he is experiencing pain, which worries this mama. In fourteen years, The Boy has never once complained of a headache, but he’s probably had one. And he definitely will not tell me if his dad’s absence and lack of communication is causing him pain, either. I have always told The Boy that he can call his dad anytime he likes. He has never taken me up on the offer. He has difficulty talking to him on the phone on the rare occasions that his dad calls him because he has difficulty creating conversation, and his dad doesn’t understand the types of questions to ask.

But I can still tell. When getting dressed, he will switch from the t-shirt I chose to the Steelers t-shirt for the day (his dad is a Steelers fan and got him the shirt one Christmas). He will ask me random questions about what his dad’s cats are doing. Little things that let me know that he’s thinking about and missing his dad.

It’s a different type of listening. More of a “noticing,” but it’s a huge skill set we autism parents develop. We use it to notice the ways our kiddos self-advocate and self-calm, so we can help them replicate the strategy if it works. We use it to notice a budding new interest that we can encourage.We use it, as in this case, to notice when they might be feeling a bit low or lonely and need some extra cuddles and attention. Basic parenting, sure, but supercharged.

I opened yesterday’s post with a series of oft-asked questions of parents of kiddos on the spectrum, the biggest of which I suspect is “Why in the hell is he doing that?”

There’s a lot of guilt one feels as a parent to a kiddo on the spectrum.  After the meltdown, or public incident, or whatever the negative behavior that just occurred was, we often think, “Was that my fault?  Did I do something wrong that caused that?” While feelings of guilt are rarely productive (although feelings are feelings and we can’t control them, really), this questions is a good starting point for a little behavior analysis.

You see, most autism parents already do this naturally, but may not know it had a name.

Let’s say I get a phone call that The Boy is repeatedly attempting to escape from science class (yep, this happened in real life).  A functional behavior assessment would serve to identify if this is occurring at a consistent time, and what the cause might be – is it another child with lots of body spray sitting next to him? Is it the brightness or noise of the projector that is turned on next to his seat at the beginning of class each day?  Does he have to pee?  Does he have anxiety about being late to his next class?  Does he feel like he is missing something important elsewhere in the building? Is he frustrated because he doesn’t understand the material? Is there too much handwriting so he is falling behind?  Through observation, they can determine what the constant variable is whenever he escapes, and then come up with a plan (move the projector, move his seat, allow him to use a study buddy or word processor to take notes, have a talk with the teacher of his next class about being welcoming and not marking him late, or allow him to use the restroom when he needs to, rather than at passing time).  Strategies often include the use of motivators and rewards, as well, to give your kiddo positive reinforcement to keep up the good work. For instance, if The Boy uses the strategy put in place, and stopped escaping from science, he could earn some extra iPad time in social skills class.

So if you are ever ready to throw your hands up and scream “WHY??”, take a deep breath, grab a notebook, and start observing.  You already do this fancy thing called Behavior Analysis, and no one knows your kid better than you. You are no “dummy”.  It may take days, weeks, or months, but you’ll get to the bottom of it. You got this. 😉