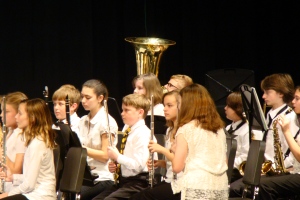 Last night, The Boy had his first band concert of the year, and played music he has had for about two weeks on his new instrument, the tuba.  There was standing-room-only in the auditorium, and The Man and I watched from the back with The Boy’s grandparents.  We heard him play, as he is the only tubist in the 6th grade band, and we heard him play well.  And I was proud, listening to my boy do his best, and do it well.

It was a great concert, and after it was over, he was geeked, excited.  Once in the car, he went right for his DS (a re-discovered love, as it has been in the bottom of some drawer for a couple of years), but was giggly and goofy.  We had to pick up The Man’s truck, and he loves to ride in it with him, so I drove on alone for the few short miles to our house.

As the car started to climb the rise of the bridge over the Intracoastal Waterway, I began to tear up with emotion as I realized how thankful I am for all that has happened in the past year.  Maybe it’s a little early for the annual retrospective, but it really has been a great couple of weeks.  Things were getting a little dark there for awhile, but now The Boy is in a much better place, school-wise (and a GREAT band program, to boot!), I have a new job that I love, and the very best husband ever.  And we’ve moved to a place where it reaches 70 degrees on the 5th of December, which also happens to be around the corner from the very best parents in the world.

One thought on “Feeling the Love”