Last week, The Man and I had a moment, a disagreement, shall we say.  And I wasn’t sure if I was gonna go there, if I was going to share with you about this experience, because, well, some things are private, and dirty laundry and all that.  But I decided that sharing the essence of what happened is important because the whole point of this blog is sharing my true experiences as a single mom, now remarried mom raising a boy with autism, and possibly showing others in the same or similar boat that they aren’t alone.

So we had a moment.  We were getting ready to leave the house to visit some friends for dinner, all three of us.  The Man and The Boy had a disagreement in the kitchen about which lunchable to take with us in case he didn’t like the food being served.  The Man got angry and stomped off.  I assisted The Boy with his lunchable, got his things together and we went to wait in the car.  After waiting in the car for a bit, it was clear The Man wasn’t coming right out, so I went in.

And we argued.  And neither one of us was completely rational — I know I was defensive (naturally).  The argument petered out enough so that we could go be social with our friends, and over the course of dinner, everything got turned right again.  Afterwards, we apologized to each other and talked a bit about what happened, and it was all good. 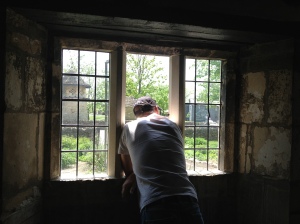 But I continued to think about the argument, because I had rarely been so angry with The Man.  And I wondered at my reaction, and then it dawned on me.  The previous day, I had reacted to The Boy much the same way when he refused to leave Grammy’s house at the appointed time, even with the help of multiple timers.  I was frustrated and handled it badly — I had stomped off in anger.  And that’s OK.  Everyone who lives with autism has those moments, where we rebel against this thing that runs our life sometimes, because it’s not fair.  We react, lightning-quick, with anger because just for that second our resources of patience have run thin from over-use.  We are human.

I had gotten so angry at The Man for being human, for having a moment of weakness, for not being perfect when I clearly wasn’t the day before.

The point is, if you live with autism, and never “lose it”, you need to be recommended for sainthood.  I know I’m not a saint, and I know I didn’t marry a saint.  And recognizing that, and seeing myself in my husband was a much needed paradigm shift.

2 thoughts on “The Fight”