If you recall, I recently ordered Earn It, Learn It by Alisa Weinstein.  It’s an introduction to her Earn My Keep program, which is a re-thought allowance program that may just teach kids more about money and the real world than you had ever hoped possible.

The first part of the book is aimed at the parents running the program: How to get started, FAQs, and the benefits of the program.  This is where it explains that rather than getting money for chores, kids in the program wil earn money for completing tasks that are in the vein of and similar to what professionals from certain careers would do.  Of course the activities are watered down to kids level, but they are brilliant in that the kids can actually start making links about the things they can do in the future, and the things they will be expected to do to earn a paycheck, and that is where that all- important, and ever-elusive lesson about the value of money is taught.  The second half of the book is aimed at the kids, and outlines 50 careers, and seriously contain so many tasks of varying intensity, that you couldn’t possibly use up all of the career tasks in 5 years with one kid.

One of my favorite things about this program is the flexibility, which is refreshing from the perspective of a special needs parent.  There is no proscribed way to do it, and you can so easily tailor it to your own needs.

Here’s how it went down in our house:  I sat down with The Boy and told him that we were going to try a new way to earn allowance which is closer to how adults earn money.  I explained that he could earn $10 for each career task completed. Of that amount, $2.50 would go into savings, and $1.00 toward charity.  If he did his regular chores every week, he could earn that extra $3.50 back.  We looked at the list that I had made of all of the careers (the book is surprisingly lacking an index), and he chose his first career – a total surprise to me – Costume Designer!

I took him a while to get going on this, and we bounced around several ideas in terms of what he could do to satisfy the first task, and we finally settled on this: He would draw a picture of the costume he wanted Grammy to help him make for Halloween, since he announced he wants to be a super hero character that he created.  Once the drawing was completed, we would go to the fabric store to make some choices about what kinds of fabrics we could use, and look at sites on the internet to determine which pieces could be purchased pre-made, and which pieces we would make.

This was his design: 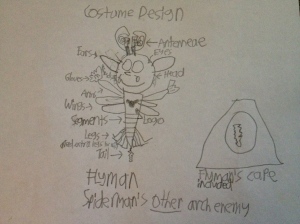 He seemed pleased and proud when this was completed.  And lo and behold, asking him to do his other chores was not a fight.  We are on to our second career task, this time he chose to do some General Contractor-ing.

6 thoughts on “Update: Earn My Keep”