Tonight was The Boy’s first full-blown band concert.  He is in 5th grade and was able to start playing an instrument in band this year.  He wanted to play tuba, but settled for the baritone (euphonium) when they wouldn’t let him start on his first choice.  At first, I couldn’t get him to practice, but lately, it hasn’t been so difficult, especially when I play with him.

If you didn’t know, this is what I do all day long.  I teach band in middle school, and to have my own son finally have his chance to play an instrument has been an experience.  My kid has been that kid that doesn’t practice, and doesn’t turn in practice time, and forgets to bring his book home.  My kid. *sigh*

But tonight, he got to see the middle school and high school bands play, and he stayed in his seat, paying attention for the whole concert.

It’s huge.  I’m not just being that mom when I say he’s got a great ear, and I really should have started him on piano ages ago.  He plays stuff by ear from time to time, did really well with recorder last year, and in general loves music.

Tonight, the high school pep band played Seven Nation Army, which is a tune by the White Stripes.  The Boy knows this song because it’s on my iPod, but it starts with the tubas playing the melody, and he turned and caught my eye as soon as he heard it with this big, open-mouthed grin, and…  I turned into my mom (no offense, Mom!) — we always joked that she cried at parades (she really did), and there I was, tearing up because The Boy had a look of such pure joy at the sound of a tuba…

Anyway, this is him – the one in the center of the picture with the (fake) glasses and the green shirt, my budding musician, the star of my show: 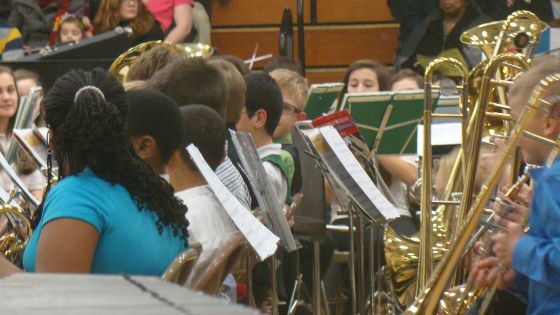 Congrats, Little Man, on what I hope is the first of many concerts!