Halloween is right around the corner, and The Boy, true to form, decided last year that he would be Sully from Monsters Inc. this year.  Once he knows what he wants, he doesn’t waver, and even though The Man and I tried to convince him that he would be a really good Dracula, he was certain he wanted to be Sully.

So Sully it is.  But I can not and will not buy an expensive costume. We will be making it as we have done for the past few years.  And since I am making it, I can steer The Boy toward a more age appropriate costume, even if the subject isn’t very. Thanks to Pinterest, I have found a hoodie-based rendition that The Boy said sounded like a good idea. And now the hunt for cheap supplies begins… 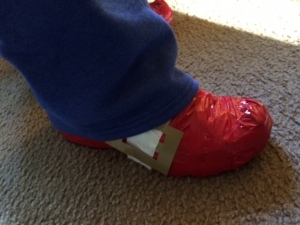 The Man and I may have tried to steer him to something more age appropriate, but in the end, it’s The Boy’s Halloween, and Halloween is for kids, not for us adults to feel better about ourselves and our children.  The choices they make show their passions and creativity, and if we start to make those decisions for them, the light in their eyes gets a little duller.

Yesterday, The Boy came home from school with a cat poster he had purchased from the book fair.  I knew it was coming home, and no, it isn’t the typical purchase from a 13 year-old eighth grade boy, but it made him happy.  So much so that he taped it to the wall in his room as soon as he put his stuff down.  I will never get in the way of him expressing his passion for the things he likes, because that’s a part of him (except for toilets… we have to limit the passion for toilets…). If I start denying that, I’m denying a part of him and it just isn’t right. To know him is to love him, and anyone who does will accept him Sully costume, cat poster and all. Anyone who doesn’t just doesn’t matter.