When we moved, The Boy asked for an email account.  I had to think awhile about whether he was old enough and responsible enough to be able to handle it.  I wanted him to have a way to communicate with friends and teachers from the home we were leaving, and I wanted him to explore Google Drive so that we wouldn’t have to rely on Microsoft, PowerPoint, and dozens of flash drives for his hobby anymore.   I took my time, did my research, and made a plan.  He and I talked at length about internet safety, with which he was already familiar, thanks to school.  I told him that I would have access to his account, and would know his password so that he would have some level of supervision of his account activities.  And with that, I gave him a supervised Gmail account.

He did attempt to change his password once, but because I had set my email address as the backup, I was notified immediately, and we discussed it.  We changed his password, and he seemed to use it appropriately after that, until he forgot his password, and we had to reset it again, but that was no big deal — again, he seemed to be on the right path.

Every once in awhile I would notice in his account that he had registered for some site, but they were kid-based animation sites, and when I investigated, he had opened a free account, but hadn’t used it.  And then about a week ago, I saw some notifications in his inbox of comments on his YouTube account…  Because when you open a Gmail account, you get a YouTube account automatically, now.  I had turned off Google+, but YouTube had slipped my mind…

With trepidation, I looked up his account.  Luckily, he didn’t have his profile picture posted on his account – just an abstract design.  Luckily he didn’t have too many views of the videos he had posted.  But unfortunately, there were two videos of himself, that he had taken with a webcam at some point. 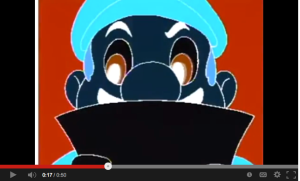 I knew I would have to talk to him again about internet safety, and we would have to take them down ASAP.  I knew he would be suspicious of me “looking at his stuff,” and he would “know what (I was) trying to do!” I knew he would have some anxiety about my knowing some of his secrets.  But I continued to look at his account, and began to see something really cool.  He had posted some other videos and comments, and I can’t pretend to understand the fascination, but these other videos were a combination of animation, other videos (like the title sequences of cartoons), and modified (very strange) music.  And the coolest thing was there were other kids that were into this same type of “creation”, knew the programs he had used (Audacity is one – I had no idea he knew how to use it!), and were asking him technical questions about how he had created it.

In his first, clumsy venture into cyberspace, he had somehow joined a community, sharing his skills, and supporting other kids.

We continue to work on his understanding of what’s OK to post, and what’s not.  I continue to monitor his internet usage through his email account and other venues.  But I also continue to tell him how proud I am of him, and I’ve asked him to show me how he makes his videos.  So cool.