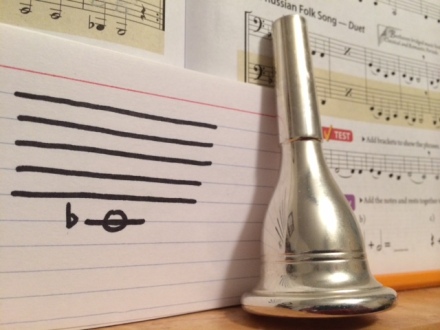 Last Tuesday, The Boy took me to lunch with a gift card Poppy had given him to do just that. I picked him up from Grammy’s, and we went to McDonald’s. Somewhere along the way, I asked him if he was still sad about the concert.

“Hm,” he said, indicating he didn’t have a ready answer.

“Or maybe you haven’t been thinking about it too much,” I suggested.

“Yeah, I haven’t been thinking about it much,” he parroted back. “I just wish it hadn’t have happened.”

I told him a little bit of the conversation I had with the principal. He asked if the band director had done anything about it. I told him the kids had had to talk to the principal and Mr. Collins about their choices. “The principal didn’t think the kids did it to be mean, though. What do you think?”

“It’s hard to tell if someone is just being mean, huh?”

“They told the principal they did it because you were playing wrong notes.”

“Even if you were, it still wasn’t their place. You don’t touch other people’s instruments.”

“No, you don’t touch other people’s instruments,” he agreed.

I asked him to tell me if anything like that happened again, and our conversation moved on to other things. He’s sad because he can’t get that performance back. I think he knows the kids treated him differently than they would have treated a neurotypical kid. I think he’s wondering why they did it. I needed him to know the jist of what had been said at the meeting and what the kids involved had said to the principal. He has a right to know. Along with the right to play.

It seems the crisis has passed, although I have had to email the band director to find out the current assignments, and to ask him to make changes to his last quarter grade based on the tests I had sent him on video.  I think “maintenance” will be required within our new arrangement, but I don’t think they will again try to steamroll me into something that just isn’t right.

The tuba has arrived, and I again thank all of my readers that tried to help.  I actually found a decent one on ebay, and it is a smaller, easier size for The Boy to handle.  It isn’t pretty, but it does work, and hopefully we can work from where we are now.

According to the director, The Boy has begun playing more in class, but is still having problems starting with everyone else.  I had asked to come in and take video to do some reverse modeling, as suggested by the autism specialist, but the director was not comfortable having me come in to do that – just wanted me to “explain” to The Boy when to start playing.  So we continue to play this game, with him pretending like he is making accommodations and modifications, when he really just doesn’t get it, and isn’t going to lift a finger to try.

But I see progress, and I’ve stopped them from going down the usual path when they encounter a kid who “doesn’t meet the criteria,” so maybe, just maybe they’ll think twice before doing it to the next kid.