We went to lunch at the beach on Saturday after cleaning up all the chunks of drywall left by the drywall hangers at the new house. We ate outside at a picnic table, and were talking about The Boy being almost done with middle school. The Man and I both agreed that not too many people would like to re-live middle school, and that he had much to look forward to in high school.

“Why don’t people want to go back to middle school?” The Boy asked.

“Well, I can tell you that kids were kind of mean to me when I was in middle school,” I said. “I don’t have very many good memories.”

“And I don’t have too many memories of it at all,” The Man said. “Nothing really great happened.”

The Boy took a moment, and then said, “I think it’s different now.”

“It is?” I asked carefully.

“The kids at my school are nice. There aren’t too many mean ones. I have good memories of middle school,” he said.

I touched The Man’s hand and gave him a look. He raised his eyebrows back at me.

That is something that every special needs parent wants to hear. That her child has good memories of middle school, and judges his classmates to be nice people.

Just a bit of dust in my eye… 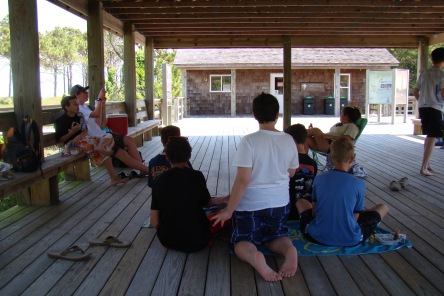