A common theme here on Simple. I Just Do. is that I forget, sometimes.  Your kid gets to be 13 and you feel like you know everything until you don’t.  His behavior is wonky, he’s depressed and ready to blow for a week, and you scratch your head and say, “I hope he gets over this thing soon, because I have no idea what’s going on with him!”

And sometimes you lose it.  You lose your patience because you are just so tired of hearing the negative, and the same thing every day, the fixations on things that never happened, and the punishments he has dreamed up for himself for poor choices he didn’t make.  And you snap, because you just don’t have any more answers, you just can’t understand, and you just can’t listen to one more minute of the perseverations.

And you start talking to him like you would talk to a neurotypical kid who is lying, or has made a poor choice, or is misbehaving, all the while knowing that he is not that kid, and this is not any of those situations.  But you do it anyway because you’ve got nothing else.

“No, that’s not true.  No, that didn’t happen.  I need to understand the real reason why you are upset.”

And you may even raise your voice a little, because he just doesn’t understand you.  And you just don’t understand him. And there is complete communication breakdown. And he begins to get teary eyed.

And then he tells you something new.

He tells you he is upset because his plug and plays are not working right, and you remember that you were going to get the crud out of the battery compartment of that one plug and play, like, two weeks ago and you never did. 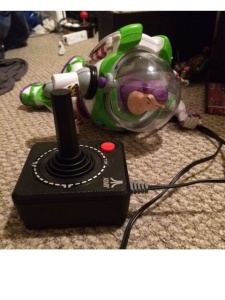 And so you hug him, and tell him to find his little screw driver so you can take the covers off of all of them.  When he brings you the screwdriver, you tell him to get the pack of batteries you bought him last weekend, and you sit down together.  And you start working on solving this problem.  This problem that he told you about two weeks ago.  This problem that you said you would help him with and you didn’t.

This problem that a neurotypical kid would have nagged you about, but that your actual autistic kid did not nag you about.

This problem that seemed small to you, but was probably huge to this boy who couldn’t communicate its importance to you.

You kick yourself because you knew and didn’t know at the same time.  You forgot that the importance of things is relative.  And he told you, but you weren’t listening.

Luckily, all he cares about is that what’s been bugging him is being fixed. He is no longer negative and depressed, but excited and chatty.  Communication breakthrough. Peace restored.  And he doesn’t hold it against you like a neurotypical kid might.  And that makes all the difference in the world.