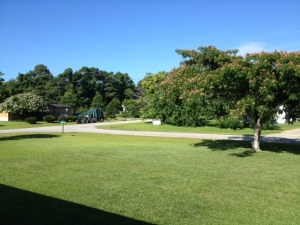 Our new house is on a cul-de-sac, and we found out early on that there are a few kids around.  This has been great for The Boy.  Even though the others are in early elementary, he gets along well with everybody, and has been riding scooters and running around with his new friends a bit.  One day last week when The Man and I were working on the new siding for the house, our place was the hub of activity, with several neighbors stopped by to chat, and all of the kids making a track for their bikes and scooters around our house.

I’ve been pretty pleased with this new social aspect in The Boy’s life, as we didn’t know too many kids on our block in our previous house.  I was pleased until yesterday.

One of the neighbor boy’s grandpa came to our house, letting me know that the young boy had told him he had given his smartphone to The Boy.  I asked if it was a real smartphone, and he said it was, pulling out his own to show me what it looked like.  I invited him in while I spoke to The Boy in his room.  As is often the case with kids with autism, asking a direct question will not often get a direct answer.  I asked The Boy if this other boy had given him a smartphone.  His responses were, “I don’t know”, “I don’t think so”, and “I can’t remember”.  Pretty evasive (and would be suspicious in a law enforcement situation, I kept thinking in the back of my mind), but I knew he didn’t have it.  If he had, I would have gotten a much more emotional response like, “What are you asking me for?!”, “Why do you want to know?!”, “I know what you’re trying to do! You’re always trying to find out what I’m doing!”

I let the grandpa know that I didn’t think he had it, but that The Boy does have autism, and therefore can’t always communicate that well, so I would look for it and let him know if we found anything.

He wasn’t accusatory, but he wasn’t conciliatory either.  He seemed suspicious, but said the young boy could have dropped it somewhere, too.  I apologized, reiterated that I would search for the phone, and said goodbye.

I did search for the phone, but found nothing, as I suspected (except a huge, scary spider! Check it out on my fb page).  And the more I thought about it, the more disappointed I became because it was obvious that the little boy had lost it somewhere and used my son as a scapegoat.  Our kids with special needs are easy targets in these cases.  Other kids quickly become aware of their communicating difficulties, and get a sense of how adults perceive them as “different”.  So when something goes missing or gets broken, one may have more luck blaming the special needs kid.

By the time The Man came home, I was resolved to not ever let The Boy play with him again, and I was angry.  It was clear this little boy had lied.  And then The Man mowed the lawn and almost ran over a smartphone laying out by the street…  He called me on his phone to come out to the street, which I did, and the little boy, another little girl from the neighborhood, and our adult neighbor from across the street who often rides bikes with them were standing there, too.  The Man addressed the little boy, asking him if he had lost a phone, and pointed to it, laying there in the partially mowed grass.  The adult neighbor looked sideways at the young boy, and told him, “We better take this to your grandpa right now,” and off they went.  Good to have witnesses…

I’m glad that everything ended well, because you know how neighborhoods are.  That could have been the beginning of years of suspicion and bad blood, with my boy on the wrong end of it all because a 6 year old decided it was easier to blame him than to admit he lost it somewhere.

My anger has cooled.  The young boy is only six, and most little kids probably would have done something similar if given the chance, and I suppose that’s how they learn about honesty.  It doesn’t make anything easier, and I have to say I’ve already warned The Boy not to take anything this young boy “gives” him.  I will always be wary in the future, and this is a reminder that I have to be wary of people who aren’t our neighbors, too.

PS  Who the hell gives a 6 year old a smartphone??