Christmas morning, The Man and I got up leisurely and decided to open our presents to each other before my parents came over for the meal, stockings, and all of the other gifts.

I gave him his gift, cleverly disguised (he told me later he thought I had bought him a large tool set, but they were actually three framed engineering prints in poster frames, which were also a great cover for the real gift — a gift card to the tool store).

Then it was my turn.  I had told The Man that I would like a watch for Christmas, and lo and behold, there was a watch-shaped box under the tree with my name on it. I unwrapped it to find “Parker” on the top of the box.  “Parker pens?” I asked, not expecting a response.  Sure enough, I opened the box and found a nice pen and pencil set, not what I expected but nice enough.  I pulled out the mechanical pencil to see how to activate the mechanism, which The Man promptly grabbed from me, leaving me to examine the pen.  I turned it over and noticed his name engraved on it… What the —??

I had not noticed The Man getting off the couch and doing some other stuff in my peripheral vision.  At the very moment I was thinking this could quite possibly be a very rough day, he suggested I look again under the tree, because he thought he saw another gift for me under there…

And there was a ring box.

After uttering his name, and looking at him to see if he was for real, I reached down, grabbed the box, opened it, and realized what he was giving me.  He asked me if I would marry him, and I said, “You know I will!” 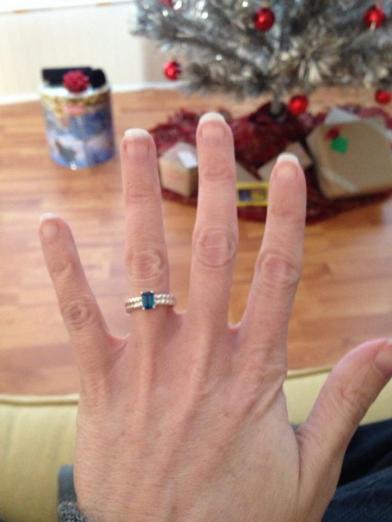 Sneaky, sneaky man.  He did an amazing job remembering exactly what I liked.  And now we are engaged!  He says he had no idea those pens had his name engraved on them, but wrapped them knowing I would think it was a watch.  He knows me so well.