The Boy, like most on the spectrum I suspect, has a difficult time with gratitude.  I often remind him to say thanks in public (although this has definitely improved over time), and I will even say, “Thanks, Mom!”to prompt his (albeit mimicked) response when I have done something for him, as a reminder that giving thanks is not just for other people.  But true gratitude is hard to come by around here. 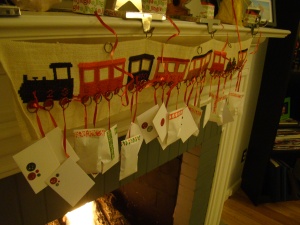 I was raised Catholic, and so the tradition of the advent calendar was an annual favorite of my childhood.  My mom, although not a Catholic, made an advent train with loops for wheels, to which little advent gifts could be attached.  I kept that train, and was very excited to pull it out for my own son as soon as he was old enough.  But I would include Christmas-y activities on some days, in lieu of a treat.  Things like “Bake Christmas cookies with mom”, or “Take a drive to see the lights in the neighborhood”.  These were traditions that I wanted to make sure The Boy could experience.

Except he had different ideas.  He wanted the stuff, and was very disappointed when it wasn’t a toy or trinket, but a piece of artfully decorated paper with words on it.  Two years ago, in a fit of rage, he ripped every gift and message off of the train after about a week.  When I found it, I was hurt, disappointed, and angry, but I simply took the train down, along with all of the mess (some of the toys included), and put everything away.

We didn’t have an advent calendar last year.

It took me awhile to realize I was asking a lot from The Boy.  That I was breaking patterns for him, and rocking his world a bit.  It took me awhile to see that the advent calendar was more for me and my nostalgia than for him.  I was attempting to do something good, and make sure we spent some family time doing fun seasonal things together, but I could have done a better job of it, and I could have been a bit more sensitive to The Boy and his needs.  I was expecting him to love everything about the season that I love, and to show his gratitude, without realizing what a tall order that is.

So advent calendar this year or no?  I don’t know yet.  If I can make it a bit more predictable, and use it as a teaching tool to help him build those thanks-giving skills…

There will be much thinking about this over Thanksgiving weekend, I guess.

7 thoughts on “Being Thankful”